I recall a pivotal event in 2009 where I attended a conference and the speaker James Fitzgerald, former CrossFit champion discussing the concept of Skill-Acquisition. That was the light bulb moment for me in appreciating movement and human performance as not simply a goal to lift as heavy as possible or run as fast as possible. More importantly, it opened the door for exploring and appreciating the concept of learning a new skill. What did this tell me?

Firstly, leaning a new skill is a way to motivate clients on a journey that is progressive and purposeful. More on this point later

Secondly, leaning a new skill is task specific meaning it can come across as menial or as complex as we make it. This feeds into the concept of what Anders Erickson has termed ‘Deliberate practice’. Even if the skill is as simple as picking a kettlebell off the ground it is still a skill and when done deliberately it ensures safety and best practice and a way to progress to the next phase of a movement, if that is the intended purpose. Lastly, that the objective of leaning a new skill is fast tracked and made purposeful precisely by what I call animating the cue. This concept focuses on a movement task and in particular focuses on the verbal communication as a way of eliciting a favourable outcome i.e. skill acquisition to retention. Let us now explore the magical concept of Mastery. Mastering a movement skill may occur in various stages of maturation as shown in the pyramid of hierarchical growth below 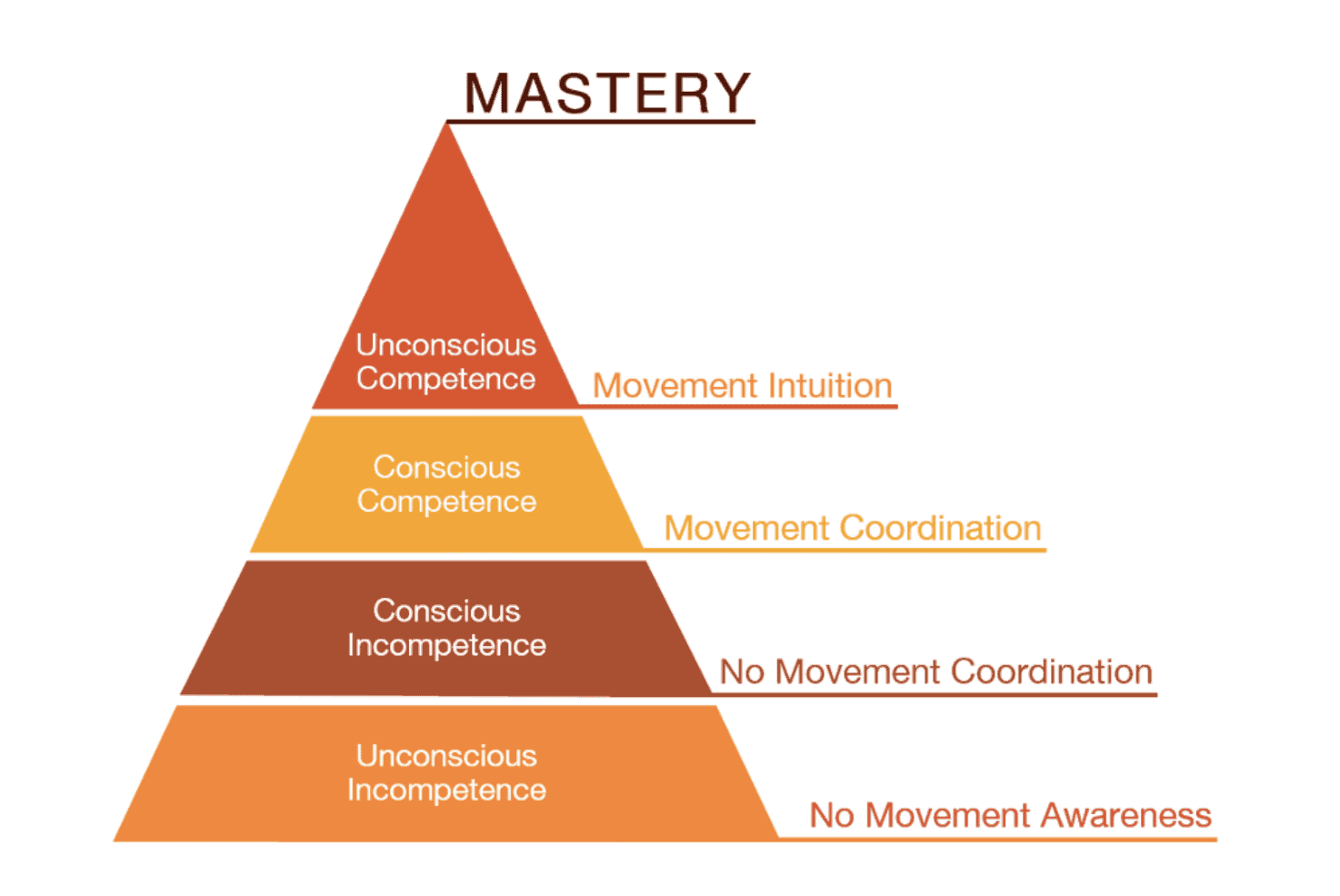 To obtain mastery in a skill that we are learning or teaching to a client there are typically 4 stages of progression which are illustrated in the above pyramid diagram. Typically, a blanket approach would be to say a client is ‘incompetent’ or ‘competent’ in a given task. As the client moves up the pyramid they become more competent which equates to a greater level of competence and also confidence.

There is one more element in this confidence-competence loop which is courage. 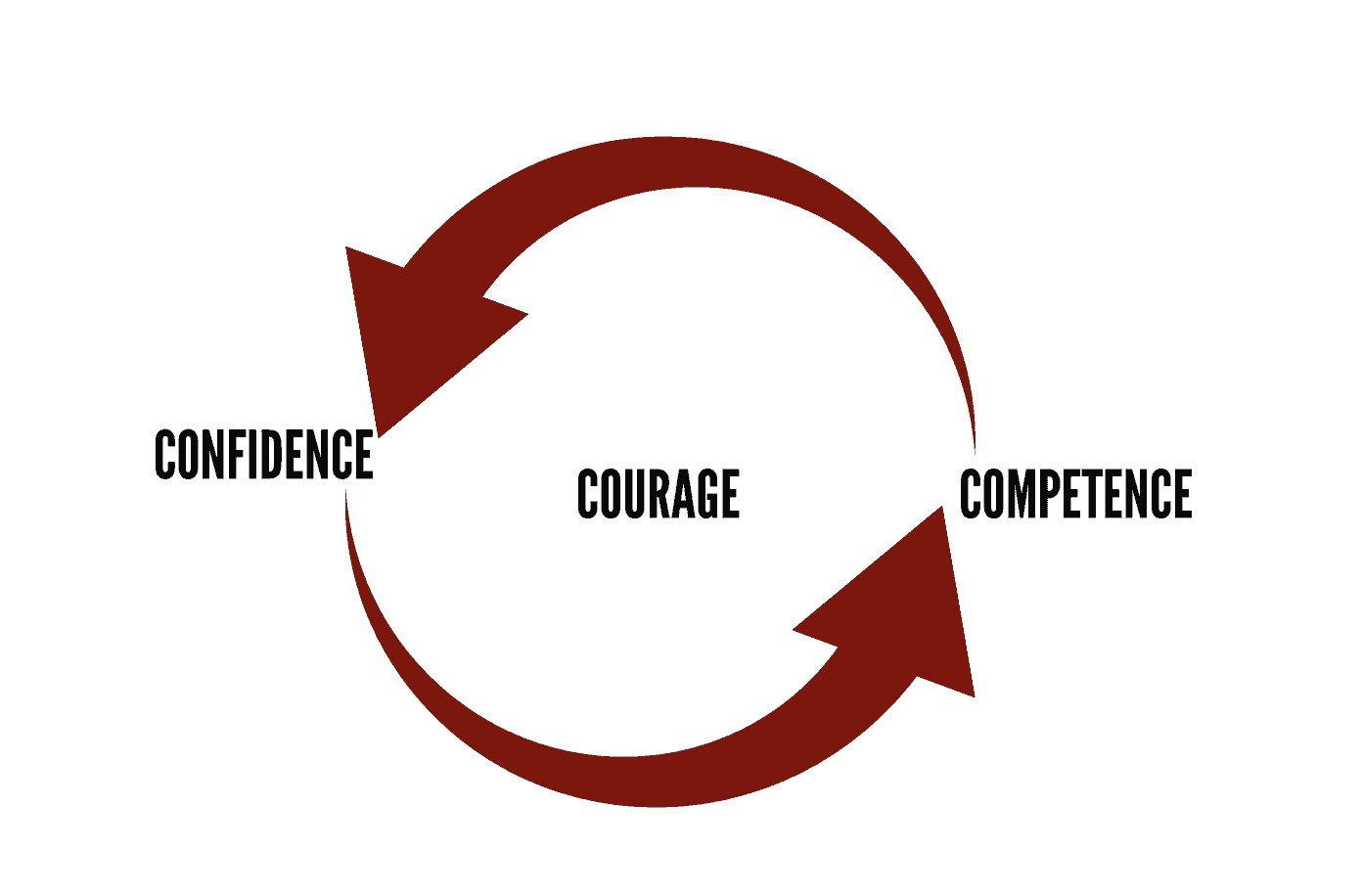 Taken together, the 3 C’s act as the rocket fuel to continue new levels and layers of mastery of a given skill. Even the greats like the martial artist Bruce Lee and the soccer legend Pele spoke of continuous and neverending learning in their specific activities even though they are regarded as possibly the greatest athletes in their given sports. #Neverstoplearning!

Given the above context we can now zoom into a specific method that will enhance and elevate the way you communicate with your clients. It is what I call ‘animating the cue’.

My good friend and expert movement coach Nick Winkelman has done a great deal of research and application on internal verse external based cuing. In his seminal lectures titled what we say matters’ part 1 and 2, Dr Winkelman lays the case for a specific method of verbal based cuing to optimise the skill acquisition process a client or athlete goes experiences.

The other side of the skill based model is ‘skill retention’. This is the ability of the client or athlete to obtain long term memory transfer.

Skill acquisition on the other hand is a series of short term transfers to the memory bucket of the client or athlete.

For now, the important concept we are dealing with here is how clients can efficiently acquire and retain a skill or sub set of skills via the Movement Task instructional model as shown below: 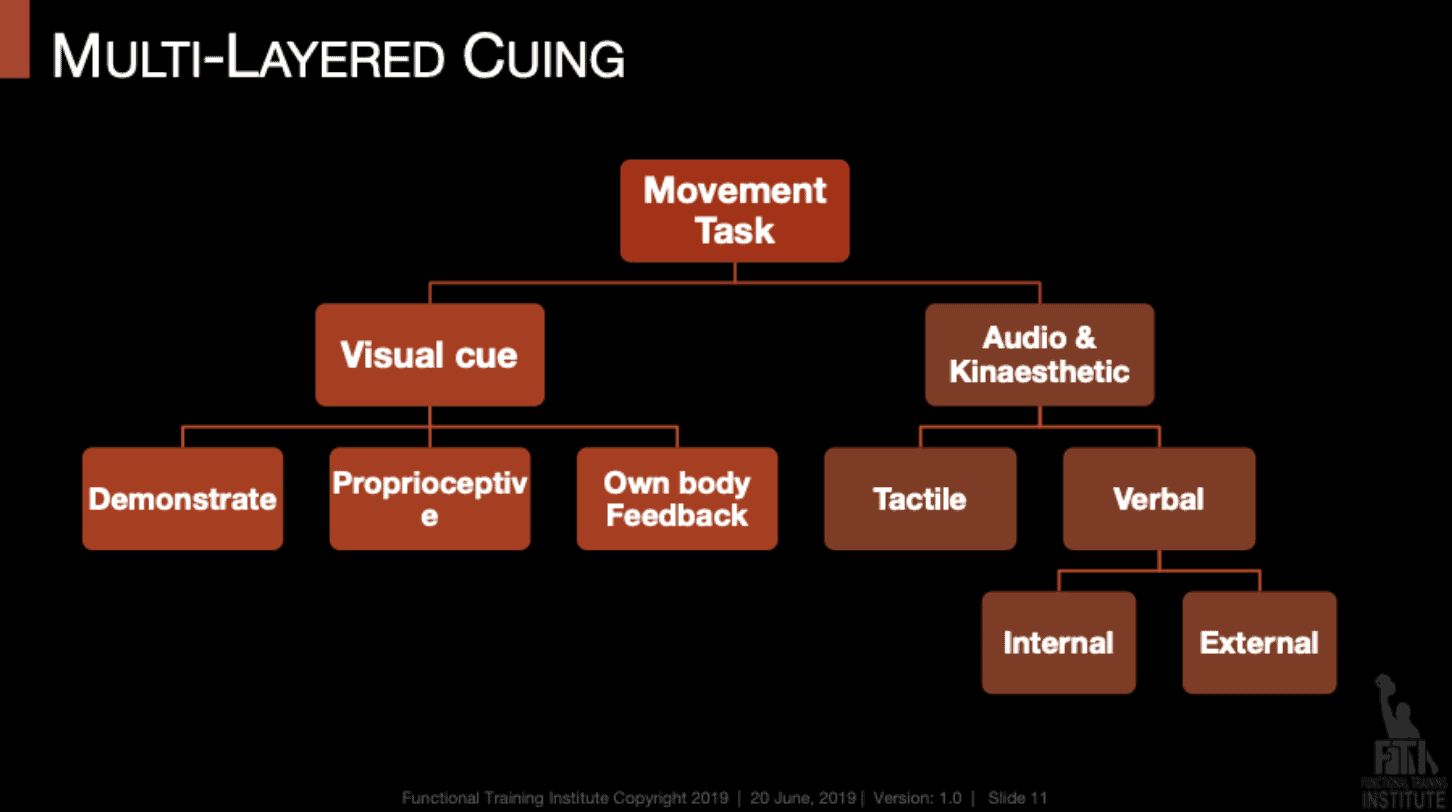 Now if we purely focus on the ‘Verbal line we see that it is broken down into ‘Internal versus External cuing’. Below is a simple way to understand the difference between these verbal ways of communicating with client 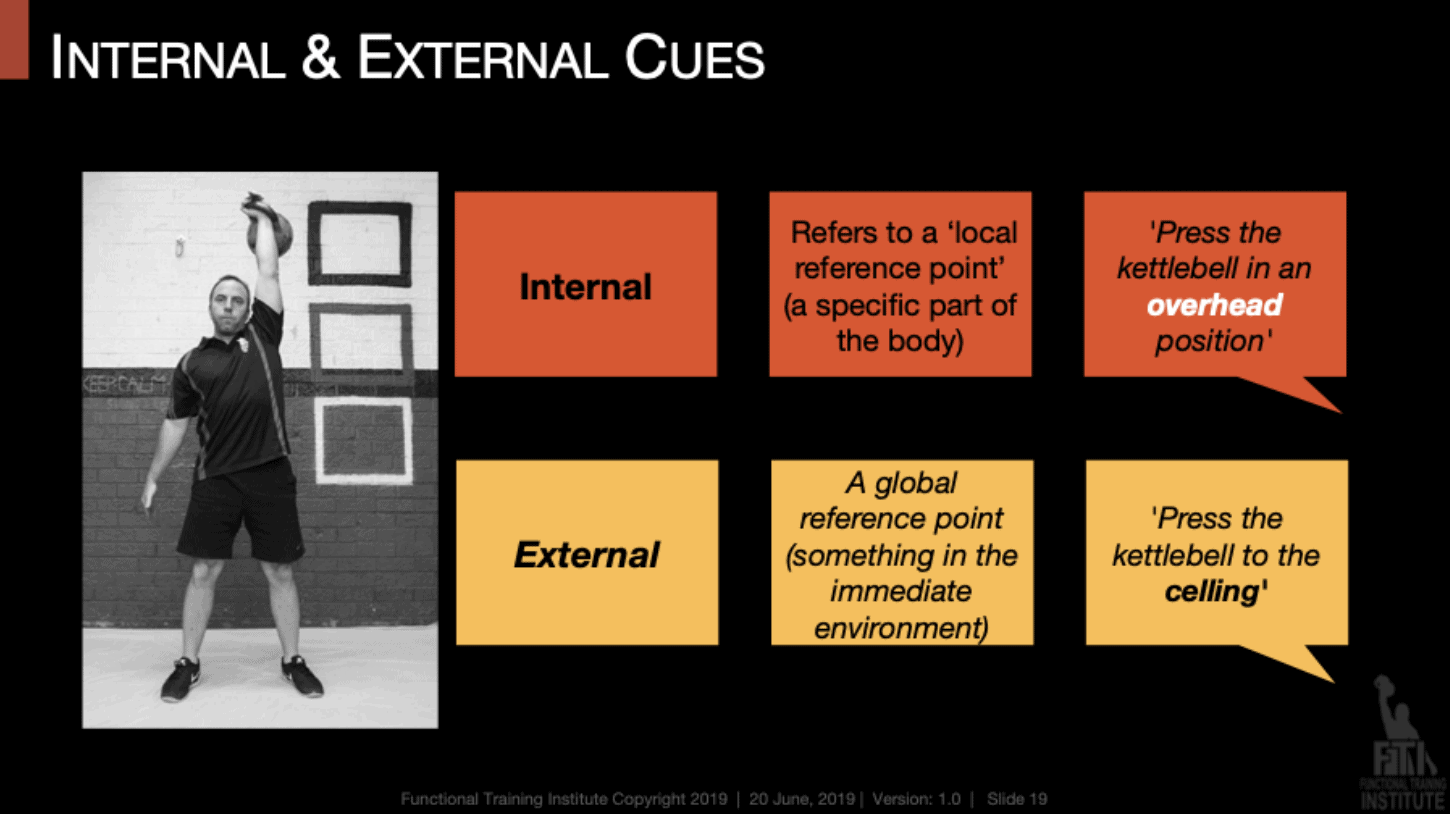 Internal cuing focuses on a body part like ‘squeeze the glutes’ as you extend the knees in the squat. In the following video I show a demonstration of how to coach the squat using external cuing 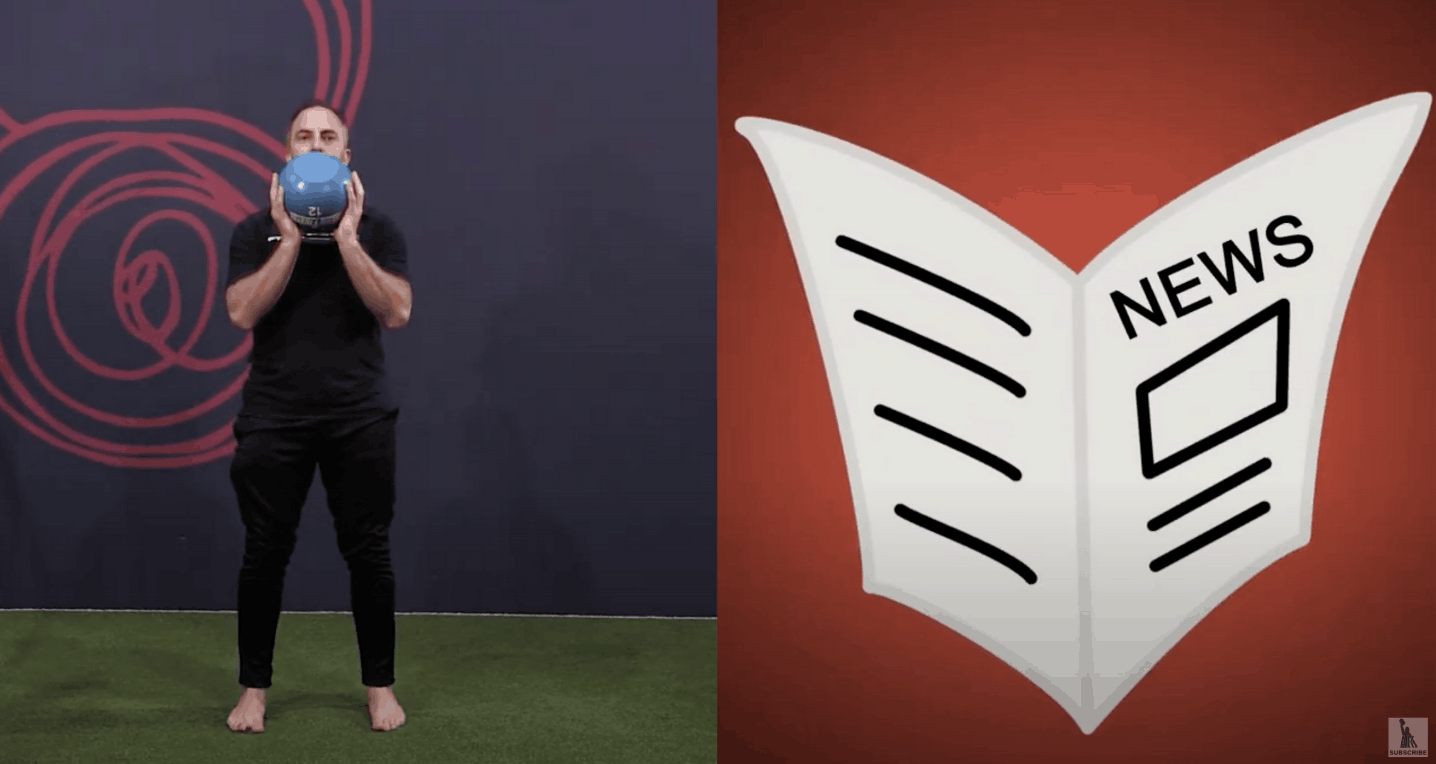 External cuing may be broken up into 3 distinct elements:

For this think of your favourite story and characters. Being a geek for marvel movies, in the following video I use Cyclops from Xmen to communicate and stabilise the eyes during the single leg hinge. 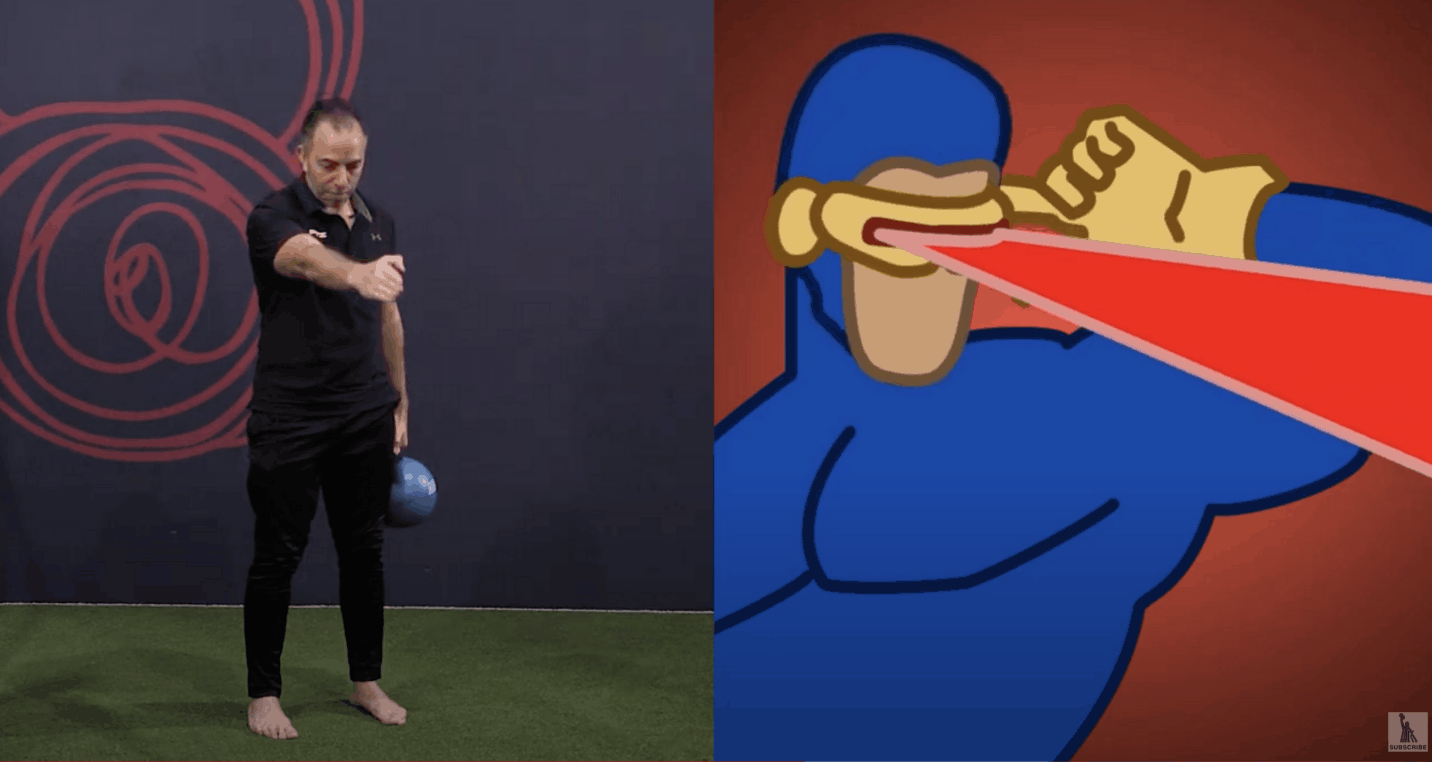 This is essentially where you are teaching your client or athlete. Is it indoors or outdoors? Are you referencing the sky or the ceiling; the wall or the tress. It is about being creative and including key features within the environment to verbally instruct the direction or distance of a particular movement as shown below. 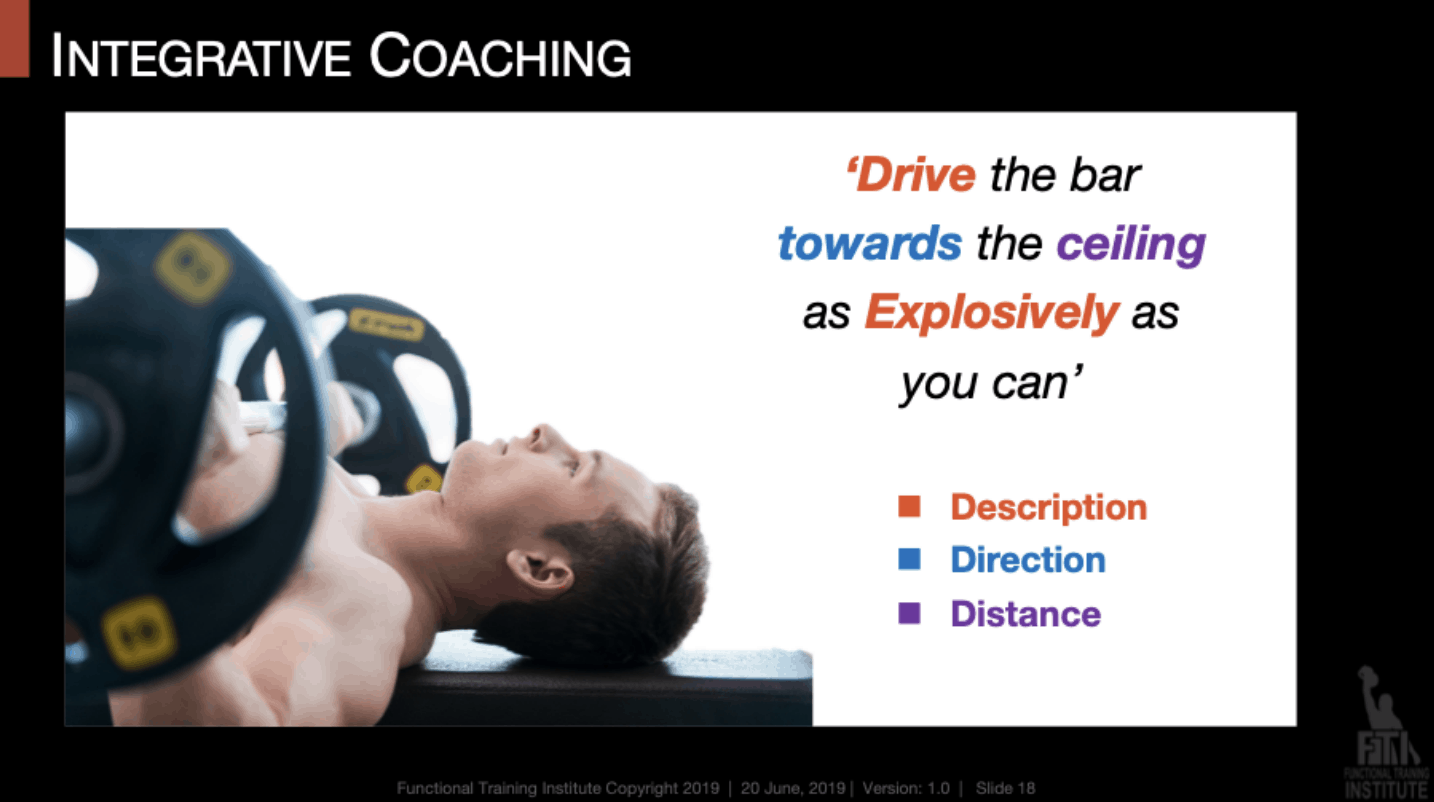 By referencing the barbell as in the above example the client can focus his attention on the implement and not the hands or arms. This is vital as it provides a focus to keep safe whilst efficiently executing the movement. Our focus in ‘animating the cue’ is how best we integrate the 3 distinct elements into a meaningful outcome for the client or athlete. Even though there is a creative licence here, external cuing, in particular the analogy and metaphor part must be context bound.

Some key considerations for contextualising the cues are:

Now it is your turn to craft your external cues 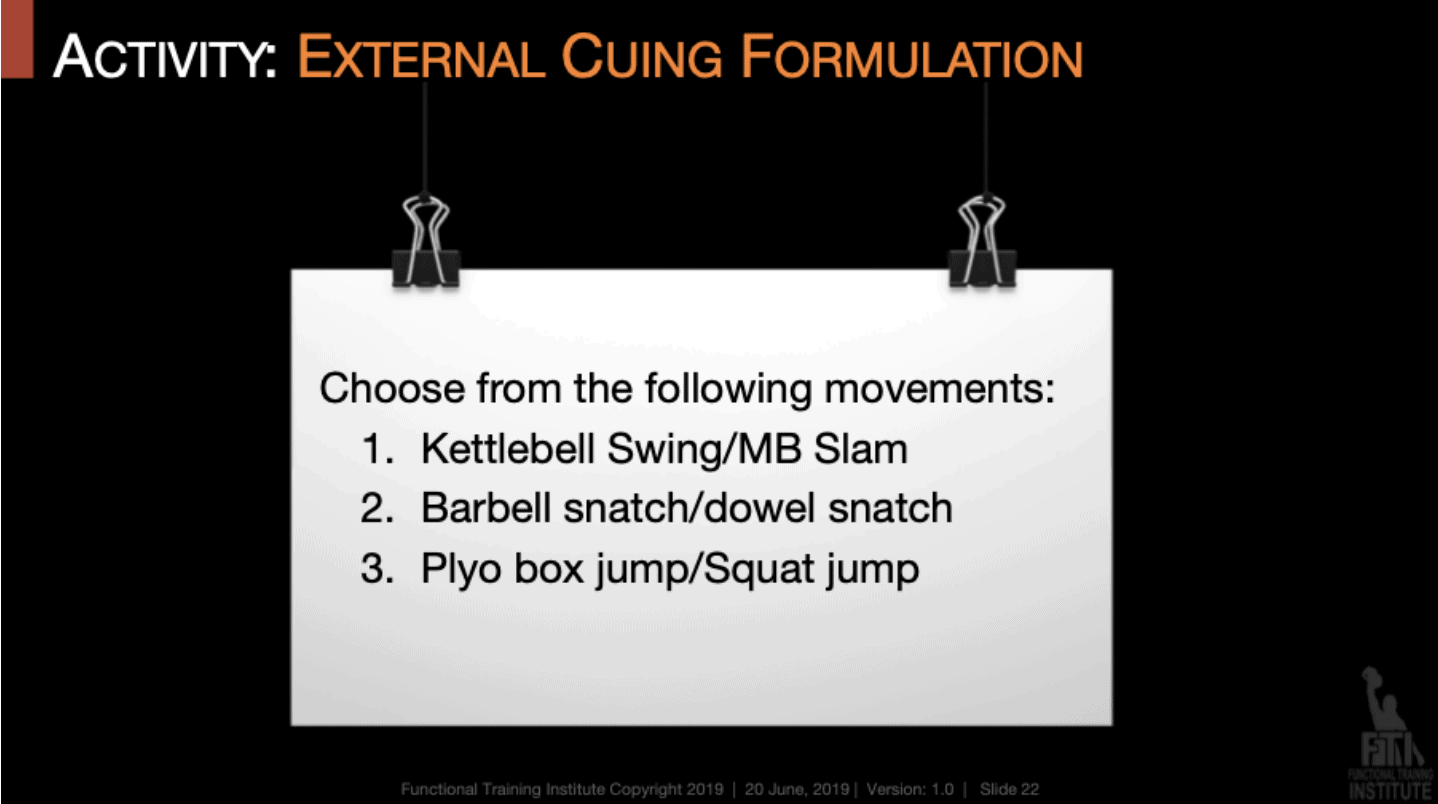 To begin, choose one of the above movements. The key is to break down the movement #deliberatepractice. At first it may feel clunky and the temptation to default into the internal framework of cuing may result. Avoid the old way and embrace the new.

At first you may find this a challenging process especially if 95% of your verbal communication has been based on internal references of the body only. Be focused and deliberate when approaching this activity.

Treat the process of creating and crafting external cues as an important part of your coaching tool kit. For when we get the coaching right we can truly optimise the clients experience 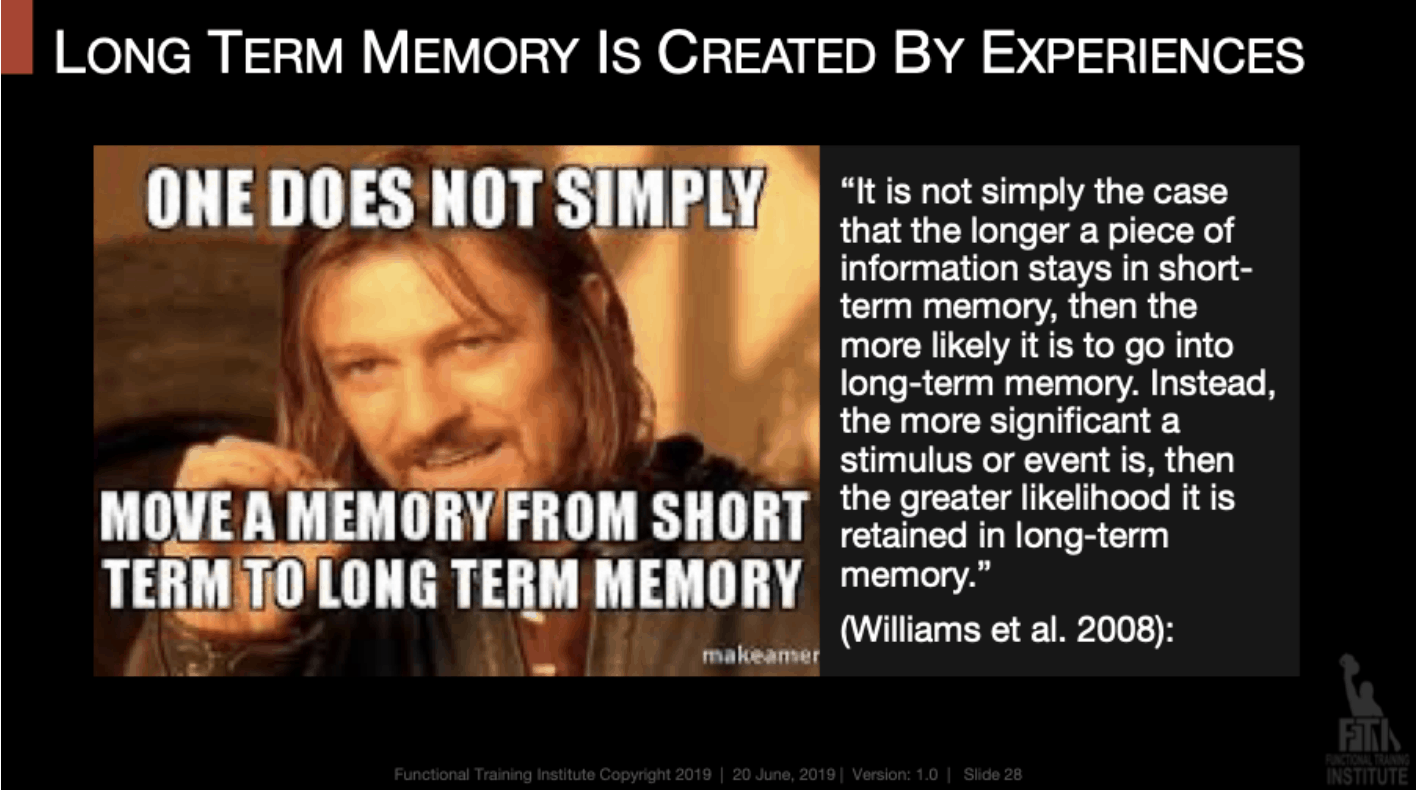 To access your FREE ‘animating the cue’ video and templates.

ARE YOU A TRAINER OR COACH WANTING TO INCREASE YOU