In this week’s post, we are going to look at an example of a very popular, but not well understood sprint interval program or SIT. Recall, that SIT programs are defined by the level of intensity, the working interval is prescribed, typically this is > 100% of maximal power output or oxygen consumption. This may be an unfamiliar concept to those who work in the field, not in research. This is because, we may use heart rate to prescribe interval intensities, but not power output or oxygen consumption which requires a maximal fitness assessment to determine. So, what very popular form of SIT am I referring to? Tabata of course, a very popular interval training method in the fitness industry. However, the Tabata interval training regime, does not fit the HIIT definition, because in his original study, Izumi Tabata prescribed the working intensities of the now famous 20:10 work to rest ratio at 170% of Vo2 Maximum. How is that possible you ask? Firstly, maximum oxygen consumption or Vo2 max is measured, usually by way of a incremental step-wise test, this is done by increasing the working intensity every 2-3 minutes until the maximum work rate is reached, at this point oxygen consumption and other variables such as peak power in watts are recorded, which then allows supra maximal intensities to be prescribed, like Tabata did, by working the athletes at 170% of their maximum values. In the case of the original Tabata program, a group of nine male athletes performed 7-8 sets of the 20:10 SIT program at 170%, 5-days per week, for 6-weeks! 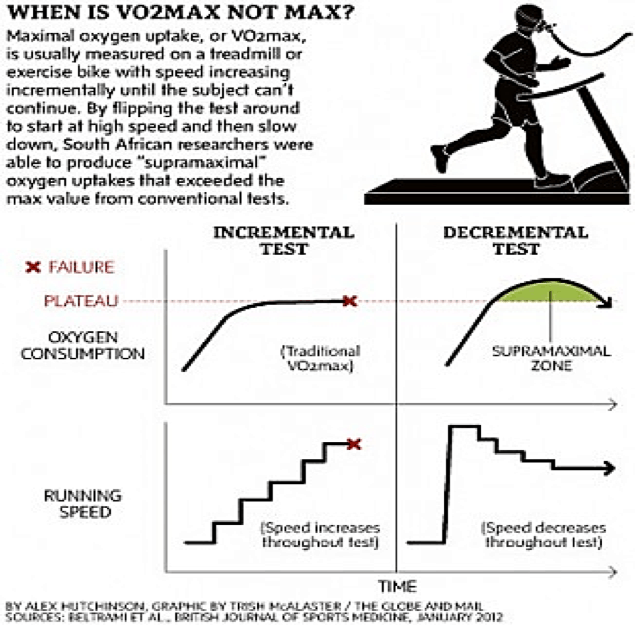 At the completion of the study period, Tabata reported the athletes improved their aerobic and anaerobic fitness levels, above and beyond that of the control group, who performed an hour of aerobic exercise, 5-days per week! The misunderstanding many people have with Tabata is the exercise intensity that this program was originally prescribed is not tolerable by many of our regular day to day clients.  Tabata even commented that many of the athletes in this study were unable to complete the 4-minutes of exercise.  Without performing a pre-training exercise test to determine your clients maximal values, it would be unlikely you would be able to determine the real working intensity of each Tabata set, let alone when performing Tabata intervals with resistance based training devices.  The original Tabata interval program, is designed for specific ergometers such as stationary bikes, because the required working intensity can be mapped to the original testing values which determined what 100% of maximum oxygen consumption actually translates to in power output such as watts and rpm’s.

The final misunderstanding that many people make, is they claim Tabata is effective for fat loss. There is no evidence to support such claims, firstly because Tabata did not measure fat loss in his studies, and to the best of my knowledge, there has not been not been any other research studies that has used the Tabata interval program successfully for fat loss.

To conclude, the Tabata program is actually a form of sprint interval training, which for the population it was originally designed for, is more appropriate for athletes, not healthy, but non-competitive adults, who want nothing more than to improve their general health and fitness.  Watered down versions of the Tabata program, are more likely to fit the HIIT training model, which in our next post can be safely adapted to meet the needs of the general population.