The Kettlebell swing is widely regarded as the ‘King’ of all Kettlebell exercises. It trains the commonly weak posterior chain muscles like no other exercise. It strengthens the core and has been found to combat back pain in many individuals. It’s hard to argue with its standing…

As good as the swing is as a kettlebell exercise I believe the snatch actually surpasses the swing as the ‘Mother of All Kettlebell Exercises’.  The snatch is a beautiful explosive movement that gets the posterior chain firing, core engaged and shoulder stabilising. It increases your heart rate, largely engages the whole body and trains areas of weakness within the body.

The kettlebell swing is of course integral within the snatch. The snatch is a single kettlebell swing with interest! A proficient and well trained swing is paramount before advancing to the snatch. The hip hinge is the foundation within the movement and this should be the driving force. A ragged and inefficient snatch can usually be traced back to a deficient swing. Whilst you will no doubt incorporate your grip and shoulder muscles you do not want these to be the primary movers. This will lead to a premature end to the snatch workout. A vast majority of people have weak posterior muscles and conditioning. The snatch is the perfect remedy when performed with a powerful hip hinge. Another key area of weakness within the body is the shoulder. The shoulder often lacks stability and once again the snatch is the perfect solution. This is because one of the other key movements in the snatch is the overhead lockout position. A word of caution here, if you have an unstable or misaligned overhead lockout position then you are not ready to embrace the snatch. The overhead position is paramount as the bell spends a majority of the time here. This is particularly the case within longer sets that we see in the sport of kettlebells (Girevoy). Holding the bell overhead is paramount in developing shoulder stability. The overhead position needs to be stable and have no deviation. The overhead press and overhead walks should be well conditioned before you introduce the snatch. You also want to ensure that your overhead lockout position is aligned properly. You can see how it should be aligned in the picture below: 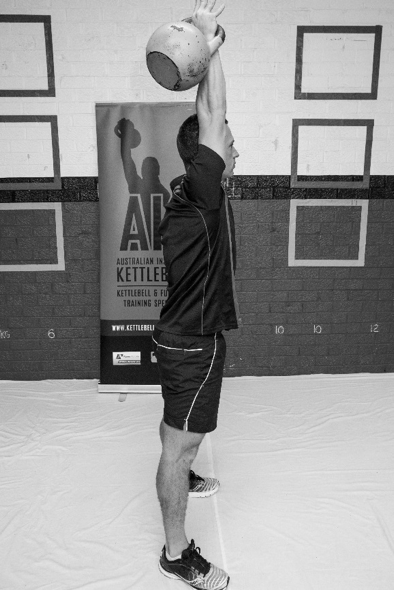 Beyond the brilliant posterior chain conditioning the snatch is a brilliant exercise for the shoulder girdle. You need to quickly decelerate and stabilise the kettlebell and this is just incredible for building strength and stability.

One of the other many great benefits of the kettlebell snatch is that it can be a great alternative to the overhead press if you are having shoulder issues. I have had some very slight impingement issues with the overhead press (particularly with the barbell press). I am still eager to incorporate overhead work and this is where the snatch has been golden. The extra thoracic mobility you have with a single arm snatch and the fact that it bypasses the AC joint are why it works.

Much like the kettlebell swing the kettlebell snatch is a magnificent movement for developing your aerobic capacity. It is a brilliant alternative to traditional aerobic activities as it is less impactful than many other activities and the metabolic response is impressive to say the least. The snatch incorporates more muscles than the swing as therefore it is superior when it comes to the metabolic impact. A recent study examined 17 female NCAA Division 1 soccer players who undertook a snatch program for 4 weeks. The increase in VO2max was significant and far superior to traditional circuit training.

The snatch is a powerful kettlebell exercise that has a multitude of benefits. It strengthens, stabilises and builds your aerobic capacity. It is the ‘Mother of all Kettlebell Exercises’!