Working out with, or without shoes?

The 1970’s witnessed the start of a huge “runners boom” that coincided with the development of specialized athletic footwear. By the time the 1990’s rolled around athletic footwear like runners were a must-have and companies were making millions from sales. But after so many decades of the ‘runner’ style shoe why haven’t we seen a decrease in lower limb-related injuries? In fact, 56% of new runners are injured during their 1st year (M. Nigg).

And do these stylish shoes actually give a helping hand in the gym, or the opposite?

This article is to help you understand the foot’s very important role in fitness and if the common athletic footwear sold is actually doing what it’s marketed to do.

The Foot’s stability and Impact Forces

A stable equilibrium (balance) is required for sports performance and the prevention of injuries. To have a stable foot that translates to a stable body the foot has to control the postural adjustments of upright stance statically and propulsion in locomotion to create, absorb and transfer energy.

The Upright stance is described as an ‘unstable inverted pendulum’, where continuous small fluctuations in body position (postural sways) are controlled by bursts of lower limb muscle activity (Tokuno et al., 2007). The majority of muscular activity during upright stance appears to occur in the ankle plantar flexors and is associated with anterior–posterior (back & forth) body sway (Winter, 1995). During locomotion, the foot has 400,000 proprioceptors firing constant feedback about where it is in space, the amount of pressure or force applied as well as the amount of vibration stomped into the ground. This information is then used to control the amount of coordinated muscle activation required for whatever posture is required for the movement attempting. Activating the correct posture from the foot up allows for optimal energy transfer which leads to increased performance outcomes and a reduction of injuries.

To put this into perspective, the foot has to stabilize and control 3-4 times your bodyweight during each heel-toe strike while running. Or, a lifter squatting 1x bodyweight has to have intrinsic foot muscle strength with the ability to contract against the weight of the body eg. 100kg, plus the weight of the bar, 100kgs = 200kgs total, it’s the foot’s strength and alignment determines where that force is distributed.

These impact forces can be seen as input signals for muscle activation (stability) and shoe design has attempted to reduce these impact forces and maintain skeletal alignment. The foot has been treated as a delicate and rigid joint which is placed in a high impact environment, thus packing shock absorbing materials into the sole of shoes. 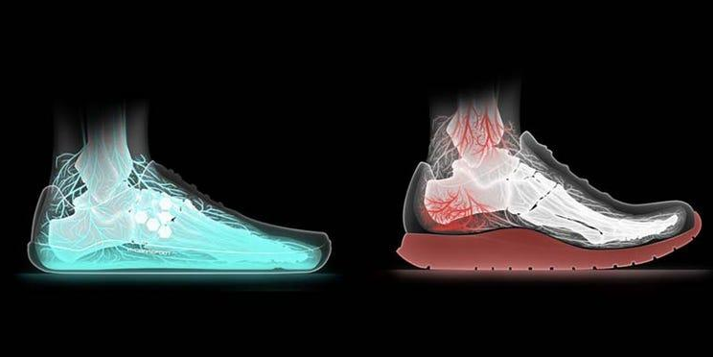 Footwear that incorporates shock absorbing materials of a certain thickness and hardness have been reported to substantially impair equilibrium statically and dynamically, up to 128% difference (S. Robbins MD).  So, the shock absorbing foam soles in shoes will help skeletal alignment and help reduce perceived shock from the impact forces but, because muscle activation to control your own bodies postural alignment and stability is determined by force and vibration, the foot becomes weak and rigid almost to the point of enhancing the problems the shoe was designed to prevent. A study done on how athletic footwear affects balance in men summarizes that the participants with thick and soft soles were unable to judge plantar pressure distribution (force across the whole foot aka stability) and destabilized the participants (S Robbins PHD, E Waked PHD, GJ Gouw PHD, J McClaran). The shoe sole acts as a filter for the force input signal and the insert or orthotic acts as a second filter for the force input signal. Since impaired stability worsens athletic ability it is suggested that shoes with thick and soft soles may not be the best choice for optimal foot stability and control of impact forces.

The support of the medial foot arch has often been proposed as one of the most important correction strategies for foot eversion/pronation control (flat foot or excessive arch). 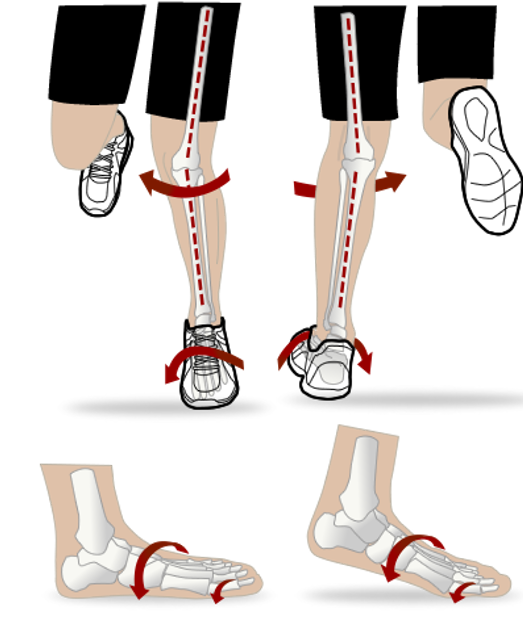 The intrinsic muscles of the foot arch help control the rotation of the tibia & fibula of the shin for efficient ankle movement as well as prevent the medial knee drift (Valgus collapse) for the femur to be in proper alignment for the hip musculature to create hip extension and flexion. But as much as the foot arch needs to be strong it also needs to be mobile. During a walking/running gait the medial foot arch collapses to a degree in order to absorb and ‘sling shot’ you forward using the elastic energy created and the stretch signals the amount of force the muscles are needed to contract.

When these foot muscles are weak a shoe and/or insole is prescribed to assist with skeletal alignment but weakens the foot muscles feedback loop and strength which results in a stiff, rigid foot unable to use stored energy or correctly align the body’s posture above.

The foot’s arch has a third action that most don’t consider and I believe to be a big player in knee or hip injury. The foot arch has a Abduction and Adduction action in order to move in the transverse plane (rotation). The foot abducts when it rotates laterally (away from the centre) and It adducts when it rotates medially (towards the centre). When the foot is enclosed with a shoe or insole that has arch support this rotational movement is restricted and has to compensate elsewhere (eg. ACL in knee). 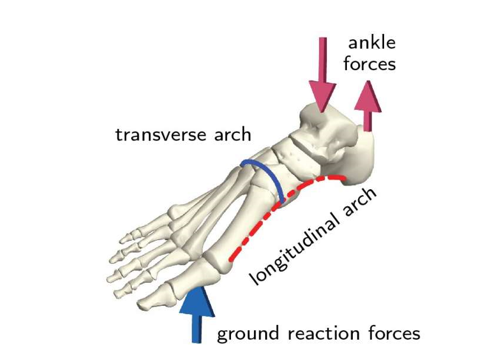 So in plyo-metric exercises like running, the shoes foot arch is really needed in a rehab setting to assist in correct alignment in the propulsion phase (moving forward or up) when the foot does need to be a rigid lever but could be detrimental in the phase the foot needs to be mobile and elastic, or when change of direction movements are needed. What about a lifter in the gym? That would require great amounts of arch control to be able to maintain correct alignment and activation of the body. But if arch support is supplemented the intrinsic foot muscles won’t receive the correct amount of pressure to activate muscles up the chain due to being able to “lean” on the arch support. If we combine that with the soft soles from above we have a foot unable to stabilize and hold a strong arch needed to support the structures above, think back to the 100kg lifter trying to squat 100kgs on their back.

Interestingly, it is said the foot arch in humans is an adaptation feature as humans became bipedal to reduce and manage shock imposed to the barefoot.

So foot arch support might be best left to the rehab setting, not so much for the athlete needing to become stronger and better coordinated for performance increases.

Today’s shoe companies design shoes that your foot has to mould to rather than making a shoe moulded to your foot. One of the design flaws here is that the ‘toe box’ of the shoes are usually too tight, causing a compression of the toes and forefoot. When you walk barefoot, your toes naturally want to spread apart. The more you walk without constricting shoes, the more your digits want to divide to create a wider, stronger base from which to move and stabilize.

Without this toe splay in motion the foot stiffens, unable to mobilize around different surfaces along the ground or absorb impact forces.

A healthy shoe will have a toe box wider than the foot to allow for this stretching effect on the plantar of the foot. When this part of the foot is mobile and strong it can effectively absorb and transfer energy, this is called elastic energy utilization. Elastic  energy utilization that stores and returns mechanical energy is considered to be an important metabolic energy saving mechanism, think about the energy that bounces you out of the bottom of a heavy squat, or the elastic energy that is needed for a powerful stride while running. A closed in shoe that compresses the toes inhibits this elastic energy system.

A heel lift in shoes has been researched for over 60 years and has been placed in shoes for reasons from rehabilitation to sports performance to fashion. Shoes with a heel raised only 4cm have been shown to reduce functional stability. As a result, researchers have identified wearing high heeled shoes as a risk factor for suffering a traumatic fall(Hapsari). Loss of balance during standing and walking when wearing higher heel footwear can be the result of postural changes and/or changes in muscular activity.

The foot joint is one of few joints that sit horizontally and this horizontal joint being the base of support for everything above some compensations for balance can be expected. The most obvious compensation is the anterior tilt of the pelvis (tilting forward) causing an excessive lower back curve. This increases the compressive force on the lower back, increasing the activity of the lower back muscles to maintain balance.

With a higher heeled shoe the foot and ankle are placed into plantarflexion (pointing toe away from knee) which causes the knee to compensate with greater flexion, which may occur due to loss of shock absorption at the ankle. And as you can expect, with high heel shoes the pressure is shifted away from the rear foot to the forefoot, but more specifically the medial side of the forefoot on the first metatarsal (knuckle of the big toe). This causes the medial collapse of the knees during things like squats, lunges, running etc which is inefficient and places uneven force throughout the body.

The ideal shoe will have a zero heel toe drop so the foot can be in it’s ideal position for balance and correct muscle activation.

The design of an athletic jogger is to provide comfort, not necessarily protection. A shoe with lots of cushioning provides a perceptual illusion whereby the perceived planta (bottom of foot) impact is less than actual impact, like a false impression. This is called ‘Discomfort-illusion impact’. The consequences are that humans will underestimate the impact and reduce impact moderating behavior, which is why all other features are then designed into the shoe.

So when searching for a shoe to wear while exercising find one with the least support as possible. A shoe with supportive modifications can help someone improve their walking or assist with rehab, but a natural walking gait/ foot function can only be achieved barefoot.