Benefits of Ground to Standing Exercises 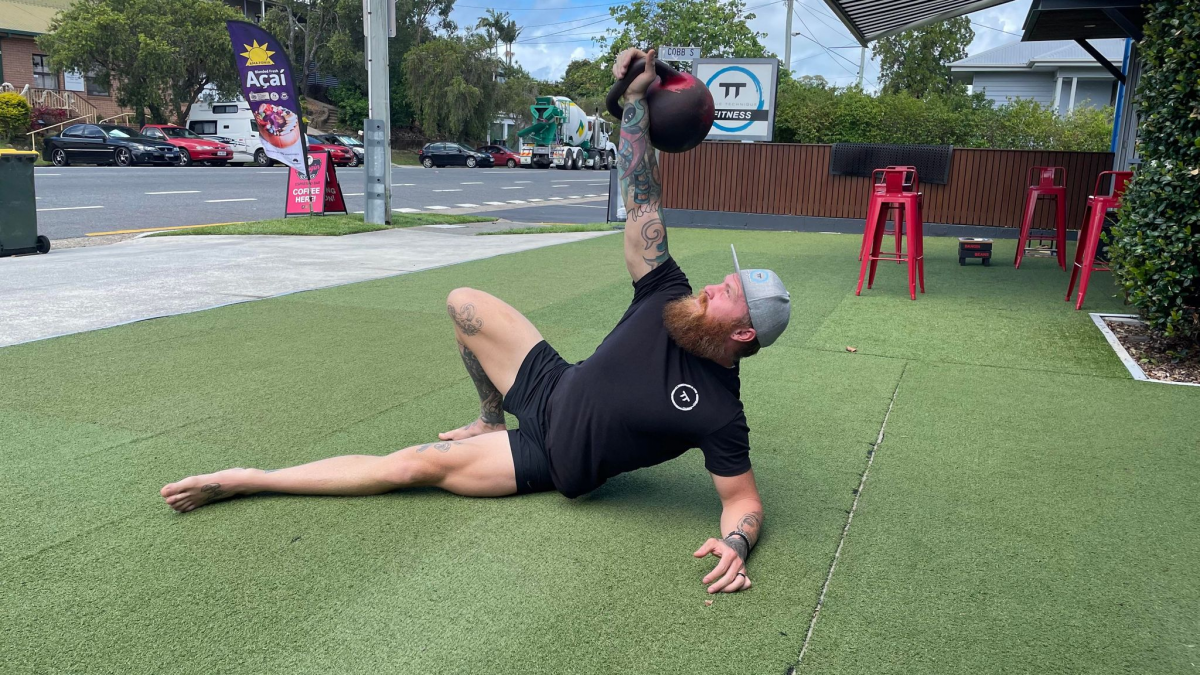 Benefits of Ground to Standing Exercises

While the fitness industry commonly uses cardiovascular improvements as an indicator to improvements in mortality, there is limited information regarding musculoskeletal fitness indicators for the longevity of life. We had Quadricep size and strength as an indicator for morality but had too many other variables, similarly to the chair sit to stand, way more practical but still lots of limiting factors.

In a previous article I wrote, found here, we compare strength, flexibility, and neurological control as indicators for injury, finding that lack of control was the best indicator of injury.

But that’s not to say injuries won’t come from a lack of strength or flexibility.

A ‘Sit and Rise’ test was devised by a team of Brazilian researchers and written up in the European Journal of Preventive Cardiology (found here), and has proven to be predictive of how long you’ll live—or, to be more accurate, of how long you won’t.

The test is simple, sit on the floor from a standing position and back to standing without using your hands, if possible. The test score is counted by the number of times you touch the floor, hand or knee for assistance.

In the Brazilian study, 2002 men and women ages 51 to 80 were followed for an average of 6.3 years, and those who needed to use both hands and knees to get up and down (whether they were middle-aged or elderly) were almost seven times more likely to die within six years than those who could spring up and down without support. Their musculoskeletal fitness, as measured by the test, was lacking. And musculoskeletal fitness, it turns out, is very important.

“It is well known that aerobic fitness is strongly related to survival,” study author Claudio Gil Soares de Araújo, a professor at Gama Filho University in Rio de Janeiro, has said, “but our study also shows that maintaining high levels of body flexibility, muscle strength, and coordination also has a favorable influence on life expectancy.” – So favorable that it’s worth practicing for.

So how do we practice for it?

Within a gym are many opportunities to practice ‘sit to stand’, or ‘ground to stand’ exercises and can incorporated into any routine for whatever the users goal. Below I have listed a few of my favorite ground to stand drills to get started.

First up is my number one favorite, The Turkish Get Up.

A series of precise steps to get from laying down to standing with a weight above you the whole time. As well as strengthening many fascial lines and positions commonly used in many methods of standing up, it restricts one arm from use which can be very useful as a constraint based cue for learning. Being loaded and a tricky movement find a good coach to guide you through optimal positions for each step. FTI’s Master Functional Trainer program takes you through each step and exactly how to coach it to someone else, highly recommend taking up that opportunity. 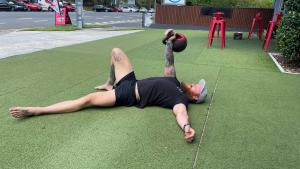 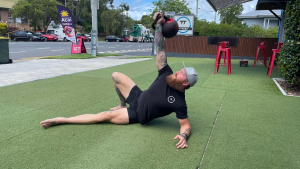 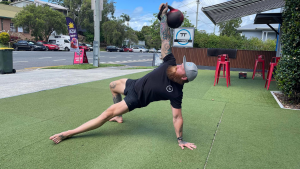 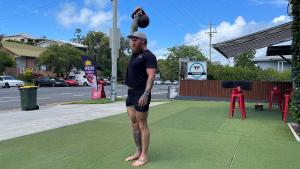 A rotational based movement using the med ball as anterior load to amplify cocontraction of the core unit, making it tighter, this in turn allows greater mobility in the hips.

We utilise the enhanced hip mobility by sitting in the 90/90 position which has your femurs at an internal and externally rotated position. Adapting to this exercise will allow a better stacking of the spine above the hips as you stand up out of awkward positions we sit on the floor with. 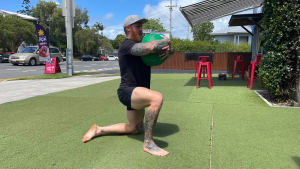 The Battle Rope Prisoner Get Up is another fantastic movement we teach in the Master Functional Trainer program. It’s a basic kneeling to stand drill using a ½ kneeling position in between. The added complexity is timing the steps with the waves created for the ropes. 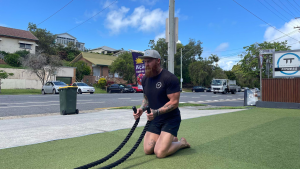 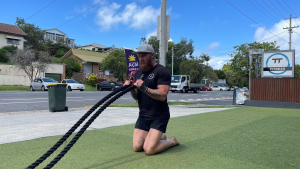 A tricky little way to raise the heart rate and get a metabolic response all while serving a bigger purpose.

Ground based movements can feel a bit like a game of confusing twister sometimes, but that is where the magic happens. Learning disciplined but free movements creates a plethora of movement pathways to use when standing up off the ground. The more ways our brain knows how to stand up the better. The Under Switch to Stand is great for shoulders, hips and everything in between, just be sure you swipe your leg under the other. Common fault here is the users leg going over the other. Very similar to the pervious exercise, the Straight leg Over Switch to Stand uses a bit more hip extension and straight leg strength. This time your leg goes over the other!

The art of being an effective and purposeful fitness coach is to be able to deliver a program that helps the client with gaining a functional body to use worry free in life but also achieves the fitness goals they came to you for.

Increasing musculoskeletal fitness through ground to stand drills is one of those ways to do exactly that.

← Working out with, or without shoes? Functional Movement Assessments... What are we really assessing? →